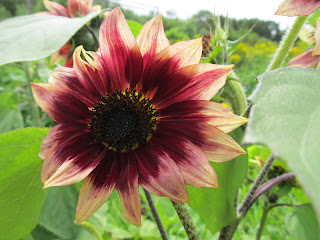 Sixteen years ago, I sat overlooking the Dartmouth harbour and asked myself “What should I do?  Which way to go?”  I had just spent the year before attending college and working on the weekends, and now seven friends of mine were gearing up to head out West.  I really wanted to go.  I totally could not afford it.  I headed back to Pleasant Street, pushing Daniel, my charge, in his wheelchair.  When I arrived at his house, Daniel’s mother was waiting.  She wanted to discuss leaving me in charge of both her children for an entire week while she went on vacation.  Since I would be responsible for them 24 hours a day, I would be paid for 24 hours a day.  In a week, I would have more than enough to join my friends.

We left in May, eight kids in two unlikely cars: a 1962 Plymouth Valiant named Hal, and a 1980s Oldsmobile Toronado.  We made our way across the country, stopping whenever we wanted, sleeping in our cars or pitching a tent.  When Jody picked up his guitar somewhere around Port Parry and Rachael sang the opening line of “Pocahontas”, the Northern lights spread up through the sky as if by magic.  We  experienced all the seasons as we drove: late spring in Ontario, deep summer heat in Manitoba, winter in Kananaskis.

We made it to Vancouver sometime in early June.  We arrived late at night, with the loose plan of staying with Mari’s brother.  He wasn’t home.  You don’t really want to sleep in your car in Vancouver!  We thought of heading out of the city, but we were so tired.  It was too late to call home to get the phone number of the one person I knew there, so we began walking aimlessly, hoping Mari’s brother would get home sooner than later.  As we walked, I saw two people sitting at a bus stop that looked familiar.  It was my friend Amy.  In a city of two million people, I found her.  We offered her and her friend a drive home and she let us stay at her house. 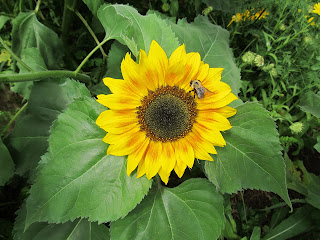 Amy lives in Sweden now, with her lovely husband and a darling baby girl.  Luckily for us, her parents still make their home in Nova Scotia, so we get to see her once a year.  When Amy came over for supper last week, it was a great excuse to do some baking.  I made this Cherry Raspberry Crisp.  You might be aware of my passion for raspberry, but I admit they’re a little seedy.  So it’s really nice to combine them with other fruits.  I used sour cherries here, which I adore, but you could also use sweet cherries, or blueberries. 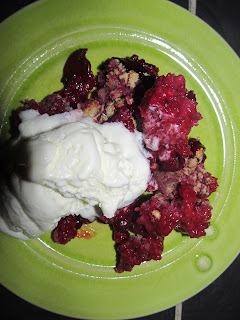 Preheat oven to 350°.  Combine the berries, white
sugar and cornstarch in a deep pie dish.  In a large bowl, combine the oats, flour, sugar, baking powder and salt.  Rub the butter in with your fingers until the mixture is crumbly.  Mix the milk and vanilla together and drizzle over the mixture.  Sir until well combined, then drop clumps over the fruit in the pie dish.  Bake for 45 minutes to an hour, until juices are bubbling thickly and crisp topping is browned and beautiful. ♥